Back to all RA Children

Prem Pethare (2004) lives with his mother and elder sister, as his father has completely abandoned them, and since 2011 they have moved in with their maternal uncle’s family.

Please select the amount you wish to donate

Donating through RA Foundation is safe, secure, and easy with many payment options to choose from.

Prem Pethare (2004) lives with his mother and elder sister, as his father has completely abandoned them. Since 2011 they have moved in with their maternal uncle’s family, which includes his wife and two children. Prem’s mother works as a maid and supports them all. Before joining Ra’s Happy Kids Program, Prem was left by himself all day long and the surrounding environment and acquaintances were starting to have a very negative influence on him, thus worrying his mother. Finally, in 2014 he was enrolled in Shri Shivaji Preparatory Military School in Pune. In spite of his shyness, Prem has made very good friends and he’s inquisitive in class, although he needs to be kept motivated to stay focused. He is eager for attention and has developed a talent for sports, especially football, and for playing drums, to the point of being selected to perform with the school band during celebrations.

Some of my Pictures 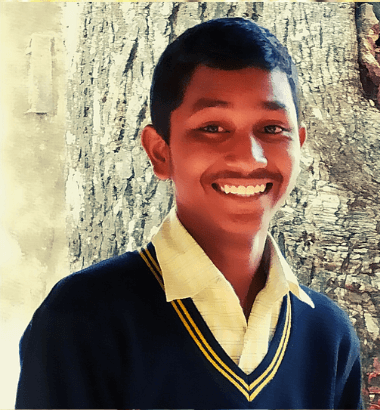